The HISTORY Channel To Premiere New Series “Pawn Stars Do America” on Wednesday, November 9.  Want to advertise your business on Pawn Stars?  Call us today at 212-844-9057. 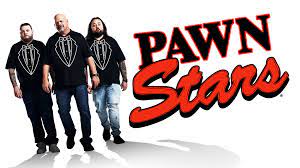 New York, NY – October 12, 2022 – For the first time, The HISTORY® Channel’s “Pawn Stars” are hitting the road to visit some of America’s most exciting places in search of historical finds and impressive collectible objects in the new 8-part series “Pawn Stars Do America.” Premiering Wednesday, November 9 at 8pm ET/PT, each two-hour episode from Leftfield Pictures follows Rick Harrison, Corey Harrison and Austin “Chumlee” Russell as they step out of the World Famous Gold & Silver Pawn Shop in Las Vegas to connect with fans in eight different cities and acquire some of the most remarkable items imaginable.

Since the premiere of “Pawn Stars” in 2009, the series has followed the Harrison family and the lively world of the pawn business in their Las Vegas shop. With over 600 episodes and a worldwide fan-base, the series continues to draw wildly unique items in which the “Pawn Stars,” along with a team of experienced appraisers and knowledgeable experts, use their sharp eyes and skills to assess the value of items from the commonplace to the truly historic. The “Pawn Stars” are known to determine what’s real and what’s fake, as they reveal the often-surprising answer to the questions on everyone’s mind, “What’s the story behind it?” and “What’s it worth?”

Now the crew is hitting the road, making stops between Seattle and Washington D.C., to purchase items directly from the source while fueling their passion for collectibles and history in “Pawn Stars Do America.” Local fans will present their treasured heirlooms for the chance at an in-person appraisal and to make some coin if they strike the right deal with the “Pawn Stars.” Viewers will not only lay eyes on insanely cool items but experience the franchise in a new way with on-site restoration reveals and local road trip excursions as the “Pawn Stars” visit, appraise and buy amazing collections. Trusted experts join local experts to share opinions and historic analysis, as well as aid with hands-on testing.