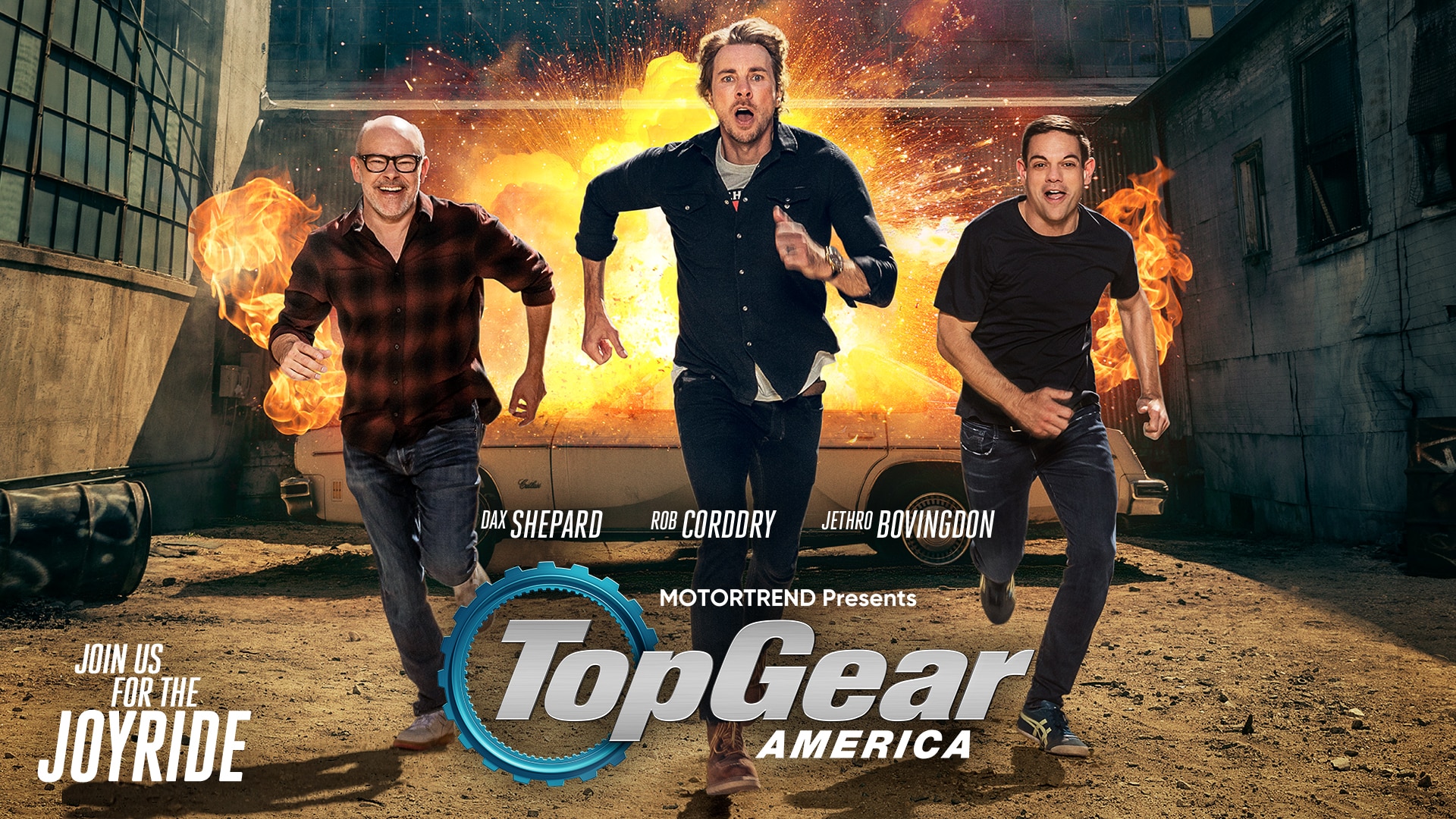 After a first season full of mayhem, supercharged adventures, friendly competition and exhilaration driving the world’s top supercars and awful clunkers, Dax Shepard, Rob Corddry and Jethro Bovingdon are back for more in the new season of the hit series TOP GEAR AMERICA only on MotorTrend+ beginning Friday, July 1, 2022. TOP GEAR AMERICA’s second season on MotorTrend+, based on the U.S. format of the popular show from BBC Studios, launches America’s birthday weekend celebration with a special two-episode premiere that finds the guys invoking the spirit of Evel Knievel on Montana’s roadways, as well as going electric in the Pacific Northwest.

“No series better captures the boundless joy and raw American take on the automotive universe like what we have with Dax, Rob and Jethro on TOP GEAR AMERICA,” said Alex Wellen, Global President and General Manager, MotorTrend Group. “Their brotherhood is authentic and their passion for driving any car under the sun is contagious. Buckle up for a thrilling new season packed bumper-to-bumper with the most exquisite cars on the ultimate American road trip.”

“When TOP GEAR AMERICA returns this summer, we take off on a fresh, fast-paced adventure in the spirit of the iconic TOP GEAR brand that delivers the ultimate combination of pulse pounding energy, daredevil stunts and irreverent humor that continue to make TOP GEAR the leading automotive entertainment show in the world,” said Valerie Bruce, General Manager, BBC Studios, Los Angeles Productions.

Produced by BBC Studios Los Angeles Productions, TOP GEAR AMERICA on MotorTrend+ is a uniquely fresh take on classic TOP GEAR, the world’s biggest motoring show. TOP GEAR AMERICA is a weekly lighthearted look at the auto industry as Dax, Rob and Jethro celebrate all the things they love about cars and argue about the things they don’t. Whether it’s searching for the perfect driver’s road to unleash elite supercars on or road-tripping in a trio of clunkers, the guys endeavor to drive the wheels off all types of cars while tackling challenges with comedy, class and commitment.

In the season two premiere, “Supercars in Montana”, on Friday, July 1, the guys travel to Butte, Mont., hometown of celebrated American stuntman Evel Knievel, where they’re inspired by Evel’s audacity to attempt reaching 200 miles per hour. To do so, Dax chooses to drive the 2021 Ford GT Heritage Edition with a top speed of 216 miles per hour and a $748,000 price tag; Rob hops behind the wheel of the 770 horsepower Lamborghini Aventador SVJ; and Jethro sports the $3.78 million Bugatti Chiron Pur Sport that can reach 124 miles per hour in 5.5 seconds. Plus, Rob does some important work dispelling an urban myth about his first car, the Ford Pinto.

“Electric Executives”, the second of the two-episode premiere, finds the TOP GEAR AMERICA hosts in Seattle where some of the biggest companies in the world are headquartered. Many of these large companies are taking a more ecofriendly approach to business these days. So, the guys decide to imagine what a high-powered, environmentally conscious Seattle based executive might drive. After some important testing at the track with The Stig, Dax jumps in the all-electric 2021 Porsche Taycan, Rob selects the Polestar 2 made by Volvo, and Jethro rebels with the gas powered Rolls Royce Ghost plus an additional business transportation power move for an important meeting downtown.

TOP GEAR is the world’s biggest motoring entertainment show. The original British version of the show debuted in its current format in 2002, and has reached an estimated audience of 350 million viewers worldwide in more than 200 territories. Across its 25+ seasons the show has thrilled viewers globally with its unique blend of entertainment, humor and car knowledge. TOP GEAR is a fast-paced and stunt-filled automotive show that tests whether cars, both mundane and extraordinary, live up to their manufacturers’ claims. The long-running series travels to locations around the world, performing extreme and often utterly pointless stunts and challenges to see what the featured cars can do and how much fun you can have with them. Celebrities including Tom Cruise, Cameron Diaz and Will Smith have all appeared as guests in a regular segment where they set a lap time on the famous TOP GEAR track in an ordinary, everyday car. Jeremy Clarkson, Richard Hammond and James May hosted TOP GEAR (UK) for more than a decade before giving way to a new crew in 2016. Matt LeBlanc hosted the show for four seasons before handing over to the current line-up of Paddy McGuinness, Freddie Flintoff and Chris Harris.