From the Producers of 90 Day Fiancé Comes the New High-Stakes, High-Drama Food Network Series Me or the Menu. Email us for advertising details at info@televisionadgroup.com 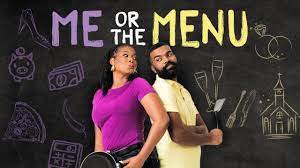 FROM THE PRODUCERS OF 90 DAY FIANCÉ COMES THE NEW HIGH-STAKES,

HIGH-DRAMA FOOD NETWORK SERIES ME OR THE MENU

WITH THE ODDS STACKED AGAINST THEM, THE RELATIONSHIPS OF FOUR

COUPLES ARE PUT TO THE TEST AS THEY WORK TO FULFILL

NEW YORK – May 23, 2022 – A new twist on the relationship docu-series, Me or the Menu, finds four couples trying to beat the odds of ending up in divorce court, while also navigating the unique challenges of the cutthroat restaurant industry. From the producers of the mega-hit franchise 90 Day Fiancé, this new Food Network series premieres Thursday, June 30th at 10pm ET/PT and will also stream on discovery+. Me or the Menu shines a spotlight on some of the reasons that approximately 60 percent of restaurants fail and nearly 50 percent of marriages end in divorce, and while some of the featured couples have just opened the doors of their new restaurants, others are diving-in headfirst hoping to make it to opening day. Despite being at different stages of their journeys, each couple feels the pressure to make their business and their relationship a success, but balancing a stressful restaurant start-up and the needs of a significant other may prove to be the ultimate test. These couples know that if they want to keep their restaurant dreams alive it won’t be easy, but they hope it will be worth it.

“Me or the Menu gives audiences an intimate look at the lives of four restaurateur couples chasing their dreams of owning a restaurant, but the stress it creates is like a pressure cooker as they navigate obstacles, conflicts and tough decisions affecting their businesses and relationships,” said Jane Latman, President, Home & Food Content and Streaming, Warner Bros. Discovery.

The Me or the Menu couples include:

Kathleen is the owner of Saucy Kat Food Truck and has a lofty goal of turning her food truck into a restaurant. She needs the help and support of her younger fiancé Nate, often causing her to treat him like an employee rather than a partner. Everything hinges on their success serving lunch at a big food truck event, but Nate’s mistakes cause them to lose hundreds of dollars and his attitude drives a huge wedge in their relationship. Nate’s lack of motivation causes Kathleen to have doubts about his commitment to her, and he must earn back Kathleen’s trust by proving he is just as committed of a business partner as he is a romantic partner.

Working long hours puts pressure on Randi, an industry veteran and first-time restaurant owner, and his fiancée, Jeanette. They have put their wedding plans on the back burner until Randi can pay back his restaurant investors. Jeanette has invested thousands of dollars into the business and has put her own career on hold to help. She fills in as the hostess, washes dishes, and does whatever is needed at the restaurant so Randi doesn’t have to pay another full-time staff member. Now, Jeanette is finally ready to step back from the restaurant, but Randi questions whether he can really run the restaurant without her.

James is a rising culinary star, and his wife Jessica, argue about finances both at home and at the restaurant. James isn’t taking home a paycheck and Jessica feels the pressure to be the sole breadwinner working two jobs. But despite being overworked, Jessica refuses to relinquish control of her responsibilities at the restaurant to pay extra money for help. Will the financial strain be too much on their relationship?

Nicole, a self-taught cook with big dreams of opening a vegan restaurant, needs the help and support of her boyfriend, Alan. Neither one of them have any experience in the restaurant industry, so they are starting from scratch to learn the ropes. The pair clash over power dynamics as they must come up with a menu and find a location they can afford. It all comes to a head when Nicole loses her cool when they host a pop-up to test their concept with customers and investors.

Fans can get to know the couples risking it all in the restaurant business at FoodNetwork.com/MeOrTheMenu. Follow along with the drama on social media using #MeOrTheMenu and tell us which couples will stick together or fall apart.