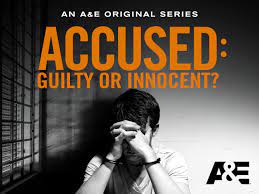 Series follows people accused of serious crimes as they prepare their defense, face trial and receive a verdict – all as their stories unfold

“Accused: Guilty or Innocent?” follows the dramatic inside stories – as they unfold – of people facing trial for serious crimes they are alleged to have committed. Each claims to be not guilty or that their actions were justifiable. The acclaimed true crime series offers an extraordinary and compelling account of what happens when someone is formally charged with a crime and sent to trial – all solely from the perspective of the accused, their legal team and family members.  Each immersive episode follows the accused person’s journey through the planning of their legal defense, their appearances in court, and, ultimately, awaiting justice. As evidence mounts and the trial approaches, these riveting and emotional stories provide an unprecedented look at what happens when your freedom is on the line.

“Accused: Guilty or Innocent?” is a favorite with A&E viewers, with season three growing over season two by +9% with A25-54.1 Season three averaged 843,000 total viewers2 and was a Top 5 Crime and Justice series on cable amongst A25-54.3

The series was a finalist in the Television category of the 2021 American Bar Association Silver Gavel Awards for Media and the Arts which honors books, documentaries, other media, and art for their role in fostering the public’s understanding of law and the legal system.

Among the cases featured in the upcoming season are: a young man stabs another man who assaulted his brother and attempted to steal from their family-run gas station. Was it attempted murder or self-defense? Police reopen the cold case murder of a young Marine who was killed in a hotel room and charge the woman who was with him at the time. Is she the mastermind behind his death or an innocent victim? A man falls asleep while driving and kills a construction worker in the road. Was he a reckless driver or an innocent man with an undiagnosed medical condition? A traveling nurse is pulled over for a traffic violation in New Mexico and is arrested for felony burglary carried out in her home state of Ohio. Is she a thug for hire or innocent with a rock-solid alibi?

Follow along at @AETV and @AETVTrueCrime and join the conversation using #AccusedAE.

The series will be available on demand and to stream on the A&E App and aetv.com.